In cartoons from my childhood, when a character got punched, their legs went up over their heads and they ended up in the clouds. There was a sort of endless cycle of characters flattening each other, only to spring back to life, to be resurrected. A lot of that sort of vaudeville stuff seems very life-like to me…I love work that looks like it’s about power, but I like it from an entirely skeptical point of view. The pomposity of it—it seems so comic as a depiction of desire.

Betty Cuningham Gallery is pleased to open 3 Paintings and 3 Drawings featuring recent work by Robert Feintuch in the Gallery’s Sidecar space. The artist will be present for an opening reception on Saturday, February 24th from 4 – 7 PM.

The paintings and drawings in this exhibition suggest a wide range of references including historical images of the Assumption, Bacchus, and Icarus, and the cartoon series Tom and Jerry, among others. Feintuch’s paintings, which play with historical, mythological and religious imagery, have been described as simultaneously “tragicomic,” “tender,” and “subversively ironic.”  Dan Mills, Director of the Bates Museum, writes, “his subjects totter, or are ‘feet up’ dead and in the clouds, in ways that conjure up both Renaissance religious painting and Wile E. Coyote.”

Drawing plays a central role in the artist’s work. Feintuch said, “I start by making drawings in sketchbooks, and if I like them enough I try to redraw them bigger… often using drawings or parts of drawings more than once. I sometimes make 10 or 15 drawings for one painting…But I also like drawings as things themselves.”

The exhibition will remain on view through April 15, 2017. 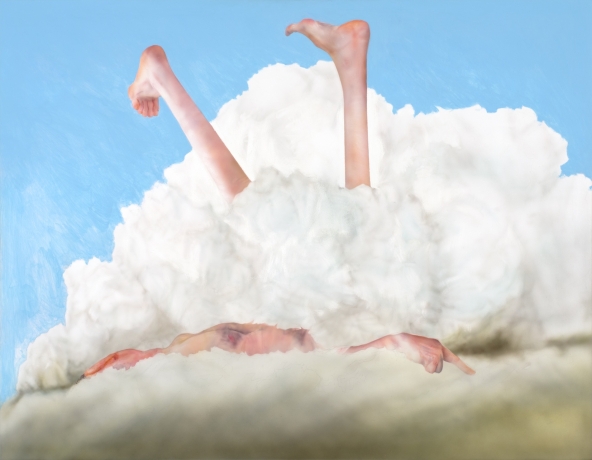 Twenty-thousand years after man first huddled in a dimly lit cave and consciously placed marks upon a wall in an attempt to better understand, and perhaps change, the world, contemporary artists continue to make marks on two-dimensional surfaces with much the same intent. No matter how many times painting has “died” over the years, it keeps coming back to take another shot - reanimated, reinvigorated and ready to deliver the goods. And why not? People still respond and attend to the oldest of mediums with a reverence that no other artifact of cultural production can elicit.