Betty Cuningham Gallery is pleased to announce Edge, an exhibition of the work of Clytie Alexander. This is Alexander’s third show with the gallery, located at 15 Rivington Street. An online viewing room will accompany the exhibition.

Continuing her investigation of space in and around the picture plane, Alexander moves from her previous exhibitions of paper collages (2017) and perforated aluminum Diaphans (2009) to probe the same issues on canvas. In an interview with Jim Long, Alexander states, “It’s about territories, worlds within worlds, suggested by a thin mark or a drawn line on canvas.” As the painted line involves the space around the canvas itself, the natural outcome is to see the work in series. Alexander embraces this inclination and has arranged the work in series that contain between 2 and 9 canvases, where each canvas responds to the next, as well as the space it inhabits.

Born in Lawrence, Kansas, Clytie Alexander was educated in Quebec and Bangladesh. She studied art at UCLA and was a member of the influential southern California artist’s community in the 60 and 70s. She is the recipient of awards and grants including: the American Academy of Arts and Letters Hassan, Speicher, Bett and Symonds Art Purchase Award 2013, 2007 and 2003; the Adolph and Esther Gottlieb Foundation Grant 2005; the Pollock Krasner Foundation Grant 1993 and 2001; and the Elizabeth Foundation Studio Program Award 1998-2018.  Her work resides in the permanent collections of the Museum of Contemporary Art, San Diego, CA; the Nelson-Atkins Museum of Art, Kansas City, MO; Weatherspoon Art Museum Greensboro, NC; Getty Research Institute Library, Los Angeles, CA; the Los Angeles County Museum of Art, CA; Harwood Museum of Art, Taos, NM; Frederick R. Weisman Museum of Art, Pepperdine University, Malibu, CA; Orange County Museum of Art, Newport Beach, CA; and the Sarah Moody Gallery of Art at The University of Alabama, Tuscaloosa, AL, among others. In 2019, Alexander had an exhibition at Steven Holl’s project space, T Space, in Rhinebeck, NY. Alexander works and lives in Santa Fe, NM.

The exhibition will be accompanied by an online viewing room and will remain on view at the Gallery through December 18, 2020. 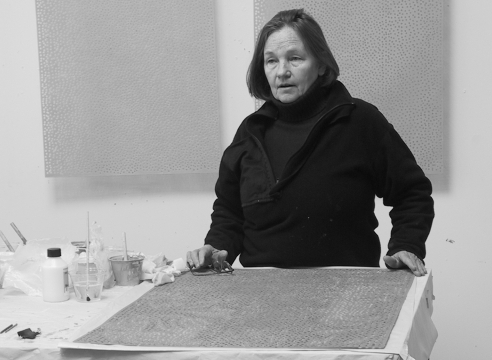